Sometimes we know very little about influental Roman families. This is the case with family Manilius. Their name even gets confused a lot as they are mixed up with families of Mallius, Mamilius and Manlius.

The precious little we know about Manilii is that M´ Manilius was the first of the family to reach consulship at 149. As one can expect from that era he was also a military commander, although not brilliantly successful one. He was probably an ally of Scipio and he left also a legal legacy being one of the early experts of Roman law – he was apparently specialized in contracts of sales. We know that he was P.f. and P.n., but we don’t know anything about those father and grandfather of his. We also can assume that he had an elder brother Publius (from naming conventions and because there was a P. Manlius alive during his era and as a member of the Senate commission for re-arranging Illyria). This elder brother of his probably had a son, P. Manilius, who became as a consul at 120.

We also know about Manilius who was a praetor at 107 and serving as a legate under Marius at the war of Jugurtha. And we know that the first Roman to write about Phoenix bird was a L. Manilius, who was a senator at the year 97. A T. Manilius, who was a senator too, was an elderly man when he testified against Roscius in the court at 76. We may assume that they were descendants of the P. Manilius (cos 120) above, but there is no evidence for it.

Tribunus plebis of 66 was C. Manilius (Crispus?) and he probably was a Pompeian by political alignment. He was the one to propose a law about giving Pompeius unlimited powers for the war against Mithridates. Cicero supported this law and it was approved with great majority. It is possible the C. Manilius was a target of court case after this and he was probably defended by Cicero unsuccesfully, but we know very little about his later life and nothing about his family ties.

Q. Manilius Cumanus was a tribune of plebs at 52, we know nothing more about him. And we know that there existed a Manilius Tusculus, who tried to kill Cassius Longinus in Hispania at 48. 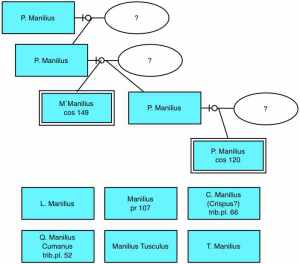 Family tree of house Manilius shows how little we know about their family relations. We don’t know about marriages or descendants even persons of consular rank.

We know nothing of marriages of any of these Manilii. We also know nothing of their possible daughters and their marriages. In fact, only Manilia we know from the republican period is a prostitute from year 150. She is famous from that curule aedile A. Hostilius Mancinus brought charges against her and accused her of not letting him into her apartment and throwing him with a stone. As a curule aedile Mancinus was officially in charge of brothels and had a right to inspect them. However Manilia defended herself by saying, that Mancinus had not tried to enter said premises as an official, but as a private individual coming from a drinking-bout with garland on his head, and therefore she had no reason to admit him. On throwing the stone she said that she had thrown it because Mancinus had tried to brake the door. The tribunes who heard the case decreed that Manilia had done nothing wrong. We may assume that she was not related to the consul of 149.

In all, this is what we know about the Manilii during the republican era of Rome. Still theirs was a family of some influence and history.